One popular question we are often asked is “How much can I make selling online?” - and it’s a nearly impossible question to answer because there are sooooo many factors that go into earnings; to name a few: what you sell, where you sell it, how much inventory you have to sell, experience level, your general business practices, customer service abilities…. Like I said, it’s impossible to give an accurate answer, so instead let’s look at data because facts don't lie!

63% of online sellers choose to sell on Marketplaces (Amazon, eBay, SEARS, Walmart, NewEgg, Poshmark etc - sites that the general public can sell on) instead of their own website (owned and operated specifically by them). And out of those people, well over half only sell on only 1 marketplace. So, let’s look at eBay first... 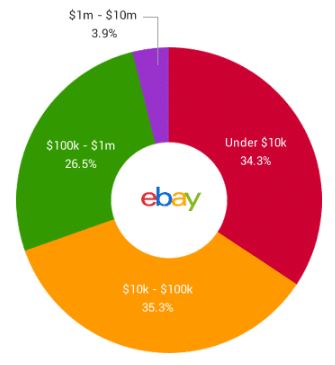 As you can see from the pie chart above, the majority of eBay sellers (approximately 70%) make $100,000 or less per year.

For some reason, the new sellers I talk to all want to make “A million dollars” (It’s always “a million”, never a different number), so if this is your goal on eBay you have approximately a 4% chance of making it. Meaning, if 100 people were in a room, 4 are going to make a million.

But, out of those 100 people, 20+ are going to make over $100,000 but less than 1 million. This sounds like exceptional odds, but when you consider the massive amount of eBay sellers, you are going to be less excited. It’s basically like winning the lottery, except for with a ton of hard work, motivation, hustle and refusal to quit. 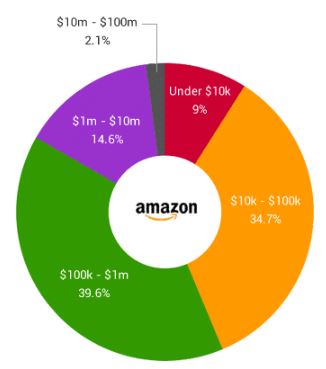 When we evaluate Amazon Sellers reported earnings, it’s a little more hopeful. The largest chunk of sellers makes over $100,000 followed by the second group of sellers who makes OVER $10,000 but under $100,000. In fact, on Amazon, only a very small percentage of sellers report earning less than $10,000 annually.

Looking at the chart above, a few things really stand out. Specifically, most sellers on SEARS, Rakuten, Other, NewEgg and Etsy make under $10,000 a year. I understand Etsy because if you’re handcrafting stuff chances are you are not able to mass-produce the quantity needed to make over $100,000 annually. Additionally, making $10,000 a year isn’t a “job” that you can live off of. With that being said, theres a ton of reasons why the numbers might be so low, some of which I mentioned at the beginning of this article. So…. I guess there’s no genuine way to know WHY these people aren’t making over $834 a month.

One really important factor that goes into earnings is obviously profit. You can sell a bracelet for $2,000 but if it cost you $1,975, you have probably lost money.

There’s a couple massive misconceptions about being an online seller:

MISCONCEPTION #2: You have to sell things for nothing on marketplaces because theres so much competition that there is no way to make money unless you have the lowest price.

Facts don’t like, so here’s a dose of reality for non-believers: 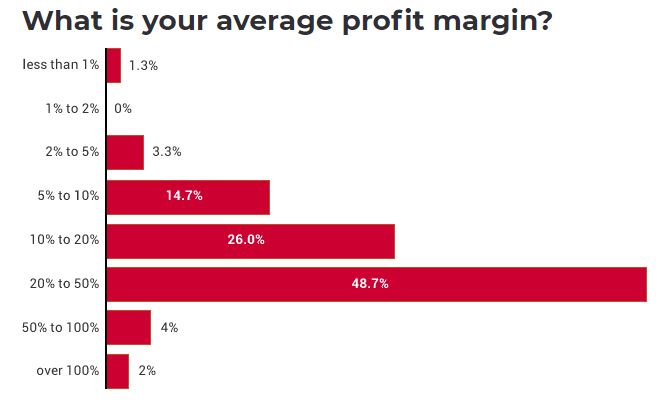 Looking at this graph, I’m hugely skeptical about who the F is selling items for UNDER 1% profit. That’s kind of insane to me…. Just my opinion. I mean, I guess if you sell eBooks or a download of some kind, 1% profit might be ok (....maybe??)

One thing I would like to point out is that very, very few sellers are making double their investment. So, if you are in the category that insists on making $100 profit on the $100 purse, this is likely the main reason the purse isn’t flying off shelves. And if it IS flying off shelves, then you are in the 2% that are able to operate with a high margin.

If you are a wise seller and have been reading this, you were probably thinking the same thing I was, which is, “Well what exactly are these people selling?”, because clearly, the merchandise you sell will determine everything else. A 10-cent gumball is going to rake in less dough than Prada Sunglasses, kapish? I’m not saying selling cheap stuff is bad in any way, it’s just a fact that there’s less room for profit. So, here’s the top categories online sellers favor: 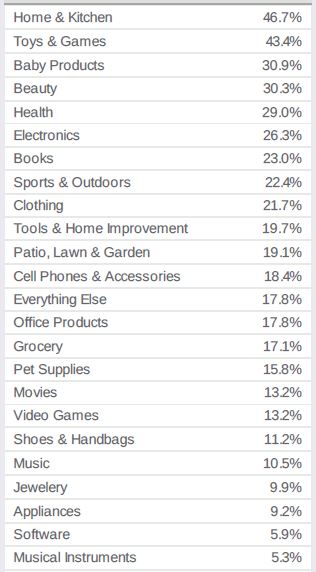 What makes this data exceptionally interesting is that based on data we previously shared with you, “Home Goods” is NOT the most popular online purchase; factually, CLOTHING is! Based on research, only 30% of men and women buy Home Goods online. So right out the gate, we can already start to uncover why so many sellers report such low earnings.

“Toys and Games” are the second favored category for internet sellers, but, again, based on research, this doesn’t even make the Top Purchases list. It’s not even in the Top 9!

Baby Products is hard to evaluate without knowing specifically what category (clothing, accessories, etc) these products fall into.

Anyways, WAYYYYYY DOWN THE LIST is Clothing… in fact only 21% of online sellers favor this category, yet it’s the most popular purchase online by men AND women! And this just goes to show why it is so imperative to read articles like this!

And, I will finish out this article with another fascinating graph…

When asked “Which Marketplaces Do You Plan to Expand To?”, this is what people said: 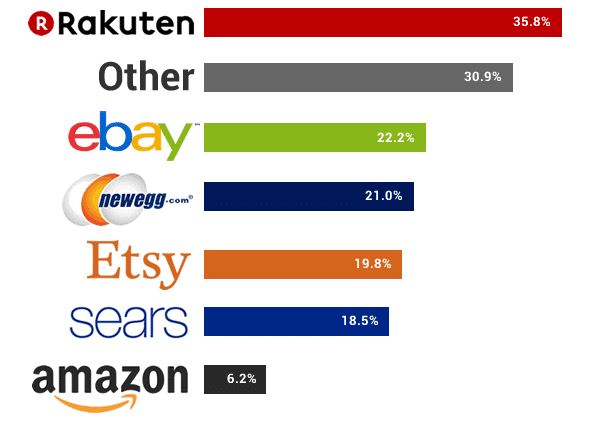 Just to show you the utter insanity of not taking the time to research:

And basically nobody plans to expand to Amazon where sellers report the highest earnings.